Belgarath the Sorcerer was the father and ultimate grandfather, respectively, of Polgara and Belgarion. He was called the Ancient and Beloved in the Mrin Codex and The Eternal Man by various storytellers and was generally regarded as the most powerful sorcerer in the universe.

Belgarath began life as a young orphaned thief two thousand years before the cracking of the world, in a village named Gara. At the time he was called Garath, which meant "of the town of Gara" in the language spoken in that place and time. After visiting the cursed Godless Ones who did not follow Gorim to Prolgu, he found himself in the Vale of Aldur. Caught there in a snowstorm and dying, he was leaning back and feeling sorry for himself when a voice invited him inside a nearby tower. He went inside, planning to steal, and found himself given tasks to do for the owner. He eventually discovered the power of the "Will and the Word", also known as sorcery. At that point, he became the first disciple of the tower's owner, Aldur, who was one of the seven Gods. He renamed him Belgarath, the "Bel-" meaning "Beloved".

He was sent on a number of missions throughout the world, dealing with issues that Aldur wished a human representative to see to. He came across a young she-wolf in his travels, while traveling in the form of a wolf himself, and she followed him to his errand and back to his tower. After hundreds of years, she saw him turn into some kind of animal and changed her form to an owl. After some time of continually springing surprising new forms on him, she eventually told him she was leaving. She took the form of a human and built a farmhouse in the Vale and Belgarath stumbled upon it, finding out her name was Poledra. It didn't take him long to realize who she was and understand that she took the form of a female human because he wasn't able to join in union with her as a wolf, and married her, and they had twin girls. One of these girls was names Polgara, and the other was Beldaran. 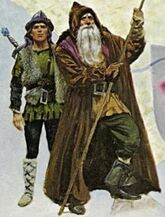 During his later travels, after the apparent death of his wife, he helped his sorceress daughter Polgara protect the last of the royal line of Riva, as well as opposing the evil, one-eyed god Torak. It was under the guise of a storyteller that he first met Garion, who was a descendant of Beldaran and the Rivan kings in Polgara's care. Also, his supposedly dead wife returned during The Malloreon.

Belgarath was often grumpy, could be foolish, and lost his temper with people. He had a number of bad habits (such as thieving and wenching), and clearly stated in Belgarath the Sorcerer that he was no saint when he failed to apologize for the occasional murders he was sent to perform, to remove certain people from the chain of events that could destroy the groundwork he was laying under Aldur's instruction.

Belgarath was comfortable wearing an ordinary—and none too clean—tunic and hose. He was also possibly unique in using a length of soft rope as a belt. In fact, in Belgarath the Sorcerer he commented that people have fantastic yet false images of what they call sorcerers, although he had often used the role of the mighty wizard in white flowing robes with a magic staff to his advantage in the past. Belgarath revealed that his habitual clothing was actually by design, including the mismatched boots, so he could look the part of an itinerant storyteller, and the entire outfit - apart from the rope belt - was made to his specifications and intended to look scruffy when they were really so well made that they were nearly indestructible (a claim made by Belgarath based on the fact that he still owned the same garments five hundred years later).

Belgarath looked upon the human condition with a mix of sympathy, amusement, and cynicism, a result of his long lifespan, which in Belgarath the Sorcerer, was about 7,000 years. He admitted that he had to distance himself from people as they grow older, because endless grief was not a condition the human mind could endure, and he, despite millennia of life, was still human. He was profoundly unfond of work except when there was a true crisis, and then his reserves of energy and dedication were seemingly inexhaustible. This strange mix of disciple and drunk, sorcerer and (occasional) lecher, irritated the young Polgara to no end, until Poledra, her mother, told her Belgarath could be serious when he has to be, but plays when he didn't need to be.

Belgarath retained a soft spot for his interminable line of "grandsons", the Rivan line, often spending time with them when they were young, enjoying such activities as fishing or story-telling. While this sometimes caused consternation in Polgara and the mothers of the boys, Belgarath often had some advice or consolation for the current Rivan heir, to help him out with whatever problems he had at the time.

Belgarath's relationship with his daughter was a scene of some amusement. To an outsider, they were continuing wrangling — usually Polgara making comments about Belgarath's appearance, habits, and hygiene, and Belgarath wincing or making dry comments of his own right back. This, however, was their own peculiar form of affection, as they'd be too embarrassed to admit outright that they loved each other.

Of all the disciples, it seemed that Belgarath was closest to Aldur, being the first disciple and the first to love him. He was driven to near bestial rage when he heard Aldur had been struck by his brother, and was willing to give up everything to follow the will of his master. His relationship with his wife, Poledra, was similar, becoming despondent for several hundred years after her death and mourning for over 3,000 — this was only ended by her reappearance in the Mallorean.

Belgarath was stated by many to be the greatest sorcerer ever to have lived, having lived 7,000 years as well as being known and feared across the world. Since the tales were so fanciful, many were taken to be myths — something he was happy to accept unless it blocked his goals. He was said to be stronger than his daughter, having taken the full force of her enraged will without yielding, but his style was bolder and more overt, while hers dealt mostly with the minds of others and so was not remembered. He was most known for his ostentatious displays of Will to get others to listen or as distractions — the most memorable example being his illusion of the sun rising, convincing enough that thousands of Morindland magicians lost control of their demons and were killed. More so than Polgara, he wasn't afraid of using his power to get someone to do what he wanted, being adept at illusion and the manipulation of the elements. He was also a skilled magician, adept at raising demons.

Belgarath was strong enough to drag Zedar beneath the ground to pure rock, where he locked him up for the rest of eternity, or until he decided to let him go.

The comparison between his strength and that of his grandson, Belgarion, was never directly stated, though Garion managed several feats his grandfather was incapable of. However, Belgarath was the far more experienced of the two, and so Garion was often happy to let his grandfather do it.

His stories were filled with sounds that made them come alive, and through the sounds and the words with which he wove the tales, sight and smell and the very feel of strange times and places seemed also to come to life for his spellbound listeners. All of this wonder he gave freely in exchange for a few meals, a few tankards of ale, and a warm spot in the hay barn in which to sleep. He roamed about the world seemingly as free of possessions as the birds.