In the beginning of the world, the Gods created only three dragons, a female and two males. In the first breeding season, the two males killed each other, and the female remained alone for millenia. While camping in Ulgoland, Garion hears the dragon, and his grandfather Belgarath tells him the sad tale, and regrets that the Grolims had sent the pitiful creature out after them.

Despite its sad nature, the dragon impressed the god Torak with its power, and he chose to take it as his totem and did as much as he could to render them invincible, most notably making them impervious to sorcery. The surviving female lived alone in its lair at the Korim/Turim reef outside of Perivor. During the events of The Malloreon she is possessed by the demon lord Mordja. She is described as an enormous bird with only vaguely draconic features, rather than that of a traditional dragon. Belgarath tells Durnik that she is about the size of Faldor's barn.

The great wings flapped again, and there was a long, despairing cry from the darkness, a cry filled with such aching loneliness that Garion felt a great surge of pity welling up in him.Magician's Gambit 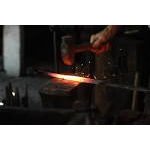