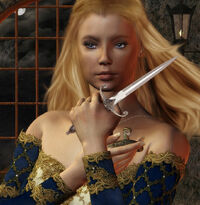 Liselle, or Velvet (as she is known at the academy) was a Drasnian spy and niece of Javelin who joined Belgarion and his companions on the search for Prince Geran.  She was a pretty(honey-)blonde girl with adorable dimples and deep, brown eyes. In the Mrin Codex she is known as The Huntress.

At Ashaba she succeeded in her mission as Hunter by killing Harakan (by then calling himself Mengha) by throwing the snake Zith in his face. During the lengthy journey she set about systematically seducing Prince Kheldar. After the events at Korim Kheldar announced their engagement, but had neglected to ask her if she would marry him. She accepted anyway.