Mandorallen is a Mimbrate knight, introduced in Queen of Sorcery, and he soon joins Garion's quest to recover the Orb of Aldur. He is the current Baron of Vo Mandor in the Duchy of Mimbre in Arendia. Mandorallen is also a Mimbrate, the political majority of two opposing socio-economic factions in Arendia. Mandorallen is described as the greatest knight in Arendia, a warrior and jouster who has never lost a battle and who, when introduced to the reader, does not understand the concept of fear. As the story progesses, we see this change, and Mandorallen becomes a more rounded character by confronting the nature of fear. Mandorallen is one of the fated companions in the quest for the Orb, and is referred to in that capacity as The Knight Protector. He takes on that role by swearing to defend and protect Ce'Nedra from harm. 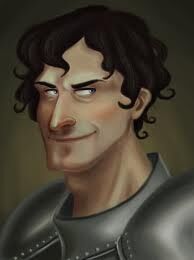 Eddings' interest in archetypal characters is seen clearly in Mandorallen, whose archaic style of speech is full of 'thees' and 'thous' and 'foreasmuches'. He acts in a manner comparable to the tales of romantic knights, demonstrating chivalric ideals and intense loyalty. For battle, he wears plate mail armor, carries a large sword and shield, and all other manner of stereotypical behavior for a knight. Alternately for traveling (assumed friendlier lands), he wears mail armor (assumed chain mail) with a deep blue with silver trimmed surcoat. Eddings also took the idea of a proper medieval tragic love triangle and incorporated it into Mandorallen. He loves Nerina, the wife of the Baron of Vo Ebor, the knight who trained him. The Baron knows they are in love, but he also loves Nerina, and Nerina loves both knights equally. Only the death of the Baron of Vo Ebor in The Malloreon resolves this situation, though even then, circumstances require involvement of Belgarion, Overlord of the West.

Mandorallen is described as "a man of slightly more than medium height. His hair was black and curly, his eyes were deep blue, and he had a resonant voice in which he expressed firmly held opinions." (Queen of Sorcery)

"My lance, my sword, and my good right arm stand ever at thy service,'and, forasmuch as I am--as all the world doth know--the mightiest knight on life, I doubt not that the overthrow of these miscreant knights shall be but a light task, which I gladly undertake, and my skill and my prowess are such that, barring accident, I may confidently assure thee that their overthrow shall not do them permanent injury." -Mandorallen