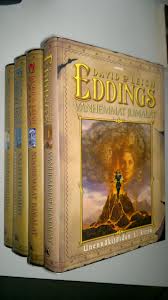 The Dreamers is the title of a fantasy series by David Eddings and his wife Leigh Eddings. The story revolves around four beings known as The Elder Gods residing in the land of Dhrall: Dahlaine of the North, Veltan of the South, Zelana of the West and Aracia of the East. They must recruit the help of outlanders to destroy the fiendish Vlagh and prevent its attempt at world conquest. The Vlagh is a creature whose more remarkable power is the ability to consciously direct the evolution of its minions, adapting them to the situation as required (the evolution is not instantaneous, but it takes months or even just days, as it is seen in the second book, The Treasured One). Most of Vlagh's creations are vaguely insect-like, venomous and violent, although some creatures have been bred human-like enough to pass as humans (and are used as spies). The creatures also share an Overmind in which all of them know and see what the others do. Despite these major advantages, the Vlagh and the creatures of the Vlagh are not intelligent. They can't even understand the meaning of death which causes many defeats early on but as they fight more they begin to avoid simple traps like arrows and poisoned spikes that the protagonists use. As the Vlagh realizes this, the heroes have already designed new traps and strategies to confuse their enemy. However, the Elder Gods are not permitted to use their powers to kill, but the young Dreamers, infant forms of the Younger Gods: Eleria (originally Balacenia), Yaltar (originally Vash), Lillabeth (originally Enalla) and Ashad (originally Dakas), can use the powers of their dreams to foresee visions of the future as a warning to an attack and cause great natural disasters capable of mass destruction and killing.

The books are written in sections each with about 4-6 chapters and each time a new one is started, it usually gives background information on a specific character and then tells the story from their perspective. On occasions, it will have a new character in every chapter, such as in the section titled "Many Voices" in The Treasured One.

There are eight Gods in the Land of Drahll. Four sleep while the other work for 25 eons, then the cycle ends, and they switch places. Each God, when awake, holds power over one of the Four Domains: North, South, East, and West.

The Younger Gods were not supposed to wake up as early as they did, before the end of the Elder Gods' cycle. But Dalhaine felt that they would be of help during the upcoming war against the Vlagh. They were rewoken as the Dreamers, origially with no memory of their past lives. But they begin to break though the mental barrier, starting with Balacenia, and realise who they are, but decide to keep it a secret.

Dakas/Ashad - Younger God of the North. Ashad was the Dreamer who predicted, in The Treasured One, that the next attack would be on Veltan's Domain, and warned them of a second army coming up from behind. When Dalhaine first brought the Younger Gods back as the Dreamers, he turned to a mother bear named Mama Broken-Tooth to feed him. His "Dream Stone" is rare black agate, which he found in Mama Broken-Tooth's cave.

Enalla/Lillabeth - Younger God of the East. Lillabeth is Aracia's Dreamer, and her 'Dream Stone' is an abalone seashell. She, like Eleria, has the tendency to call Rabbit 'Bunny'.

Balacenia/Eleria - Younger God of the West. Eleria is Zelana's Dreamer, the first to have one of the special dreams. She tends to be a very sweet little child, and some people tend to pick up her childish phrases, such as 'Kiss-kiss' and 'Teenie-weenie'. Her 'Dream Stone' is a large pink pearl the size of an apple.

Vash/Yaltar - Younger God of the South. Yaltar is Veltan's Dreamer. His 'Dream Stone' is a fire opal. His first dream pinpointed the exact location of the first attack, in the ravine near Lattash.

The Land of Maag lies to the west of Dhrall. Its inhabitants tend to be rather rowdy, and most make their living as pirates.

Captain Sorgan Hook-Beak - Captain of the Seagull. Zelana placed him in charge of all the Maag armies she hired for the war. Eleria teases him by calling him "Hook-Big". His two cousins, Skell and Torl, have command over other parts of his fleet, but he still in charge of the entire fleet.

Rabbit - Smithy on the Seagull. Many thought he was dim-witted, but he actually hid his cleverness to avoid being set diffcult tasks. He discovered he could tell the position of the ship by the stars in the sky, and is the only one who knows that the Seagull is farther away from the Land of Maag than everyone else thinks. Eleria (and Lillabeth )calls him "Bunny", and in return, he calls her "Baby Sister". He, Keselo, and Longbow are good friends. One of the first outlanders to learn the secret of the Dreamers, the other being Keselo.

Ox - Sorgan's first mate. Described by Rabbit as having 'muscles on top of muscles from his head to his toenails'.

Kaldo Tree-top - Crow's nest crewman on the Seagull. Tallest Maag, noted to be 'well over seven feet tall' in "The Elder Gods".

Hammer - Smith on The Shark. Was skeptical about Longbow's archery skills, so he had to walk around half a mile down the beach with a clamshell, only to have Longbow shatter it with an arrow, to get proof.

Kajak - Maag ship captain. Rallied his four cousins in "The Elder Gods" to attack the Seagull in the Maag port of Kweta, and steal the hundred blocks of gold on board. He was thwarted when Eleria had a dream warning them of the attack. She and Zelana informed Longbow, who enlisted Rabbit's help. Kajak was killed by one of Longbow's arrows, while screaming at his men to stop running away.

The Trogite Empire lies south of Dhrall, and its inhabitants are slightly more civilized than those of Maag.

Commander Narasan - Commander of the Trogite army hired by Veltan to fight in the War of Dhrall. He threw away his uniform when his nephew Astal was killed in battle, and only returned to his military career when Veltan approached him with his offer. Until then, Keselo was often sent to try and persuade him.

Keselo - Junior officer in Narasan's army. Described as being more clever than most of the senior officers, and known for spoiling good, long arguments by coming up with simple compromises. Has developed a friendship with Rabbit, Red-Beard, and Longbow, as well as Omago. One of the first outlanders to learn of the gods' secrets.

Gunda - He is a 'first-rate' fort builder and thinks everything is about twice as big, as written in the first book, "The Elder Gods". He is Narasan's Childhood Friend,along side Padan.

Andar - A Subcommander in Narasan's army. He terrorizes Holy Takal Bersla of Aracia's Temple, with the threat of 'cannibalism', when Bersla doesn't believe that Aracia's domain is in any harm from the Vlagh's bugs.

Padan - Narasan's Childhood friend. He pretends to be a Maag in the fourth book, "The Younger Gods"

Longbow - A member of Chief Old-Bear's tribe, he is described as "A tell,lean man w\ith long blond braids and wearing leather clothing, quite lean, with a hard face." He is extremely skilled with a bow, never missing a target. He hates the Vlagh with such a passion that he dedicated more than half his life to kill It and the Bug People. It is later revealed that a mutated bug,from the Vlagh, had killed Misty-Water (Longbow's Bride), on the day of Longbow's wedding.

Red-beard - Reluctant Chieftain of (new) Lattash,after the first Lattash was destroyed by Yaltar's (Vash) lava,from the twin volcanoes he made erupt to kill the Bug People (The previous chief,White-Braid, was distraught, and sank into depression). He has a whole section of the third book, "Crystal Gorge" dedicated to him, aptly titled "The Reluctant Chieftain"

Omago - Ara's husband Omago. He received education from Veltan when he was younger. In the last book,he is revealed to be "Eternal Omago" the father of the 8 Gods Of Dhrall

Ara - Omago's wife. She first saw Omago when she was sixteen,quite bluntly saying "My name is Ara. I'm sixteen years old and I want you!". She is the Treasured One, Longbow's 'unknown friend', and The Mother of The 8 Gods of Dhrall

None. The Maags and Trogites did the work,the priests were ordered to assist them,but they complained quite loudly.